DFW VMUG held it’s annual User Conference September 25 at the Irving Convention Center and it was a blast. It was great to see so many people that are a part of the VMware community come together and geek out. I even had some of my non-VM coworkers come and learn about some new software and hardware at the Vendor Crawl. It was cool for them to see the journey VMware is on. 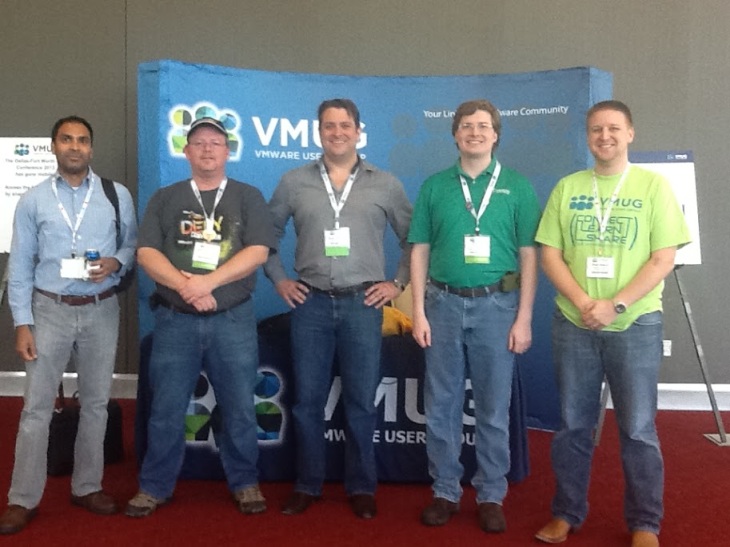 Also got a chance to meet up with some of the DFW VMUG members (Nigel, John, Brad, Matt and Me) The keynotes were well prepared and the speakers for the breakout sessions had some great material to present. I couldn’t get to all of them but I attended 4 sessions and wanted to do a session download, we do this at our company anytime someone goes to a conference, it helps to keep everyone informed:

Tommy Trudgen (vTexan) from EMC gave a great presentation showcasing the evolution of Virtualization and how EMC is helping push the boundaries of the Software Defined Data Center. He illustrated the highs and lows of EMC and how they capitalized emerging software and technologies to keep them moving forward and a leader in the storage market.

By the time VSAN had been announced at VMworld, I wasn’t able to get signed up any sessions. I wasn’t going to waste time with Hands On Labs at VMworld so I was really pumped to do a deep dive on the subject. For those that aren’t familiar with VSAN it is VMware’s version of SAN independence and storage convergence. The best example I can give on convergence is Google’s Server Clusters, by storing spinning drives at the nodes instead of centrally storing in a SAN, they couple all the disks into logical arrays. By doing this, you can scale storage and performance on demand as opposed to sizing a SAN prior to implementation and then adding shelves to handle growth, be it expected or not.

That was the quick version, for a more detailed assessment of what VSAN is, check out Duncan’s article at Yellow Bricks, lets dive into some best practices for VSAN.

Automation is a concept that I am trying to learn more about, this session threw gas on the fire for me. PowerCLI and PowerShell is the start to making vCenter commands more automated, but it doesn’t automate processes, in comes Puppet Labs. Puppet Labs is an automation platform (Purchase and Open Source Models) that the vCloud and vSphere teams use to automate provisioning of Application stacks and other management intensive processes. VMware also makes available all of the Puppet Lab scripts that they use on GitHub.

Think about the last time you implemented a software solution, what was the first thing you did, white papers right? Our company implemented an ERP platform and our install process was over 200 steps just for the servers! Now think about spitting out some code and clicking run….yup! To play with Puppet Labs start with something simple like the vCenter Server Appliance and configure IP, DNS, hostname, etc. In very simple terms, that’s Puppet Labs, check them out and if you have any questions, give Nick Weaver a tweet, also check out another project works on: Project Zombie.

If you are part of the SLED market (State, Local and Education) then you have probably heard of Presidio, they have implemented VDI solutions in 1/3 of the Nations Colleges that is no small feat. Mark Vaughn gave a compelling presentation of common misconceptions with VDI, areas to avoid, lessons learned and what we can expect from VDI in the near future and how VMware is leading the industry in virtualizing desktops and offering Desktops-as-a-Service (DaaS).

Storage performance is on every admin’s mind, unless you have a Flash array! Brad gave a high level overview of how storage has evolved with the releases of vSphere 5.5, VSAN, and vFlas Read Cache. I got some good nuggets of information when running esxtop and understanding averages vs peaks, here are some valuable slides on esxtop info.

On top of those valuable slides, he also recommended some tools that can be used to diagnose storage problems and help isolate the problem:

All in all it was a great User Conference, this was my first and will not be my last. Up next VMworld Barcelona is going on right now and then later in October VMworld on the Road is coming also, check those out if you can!